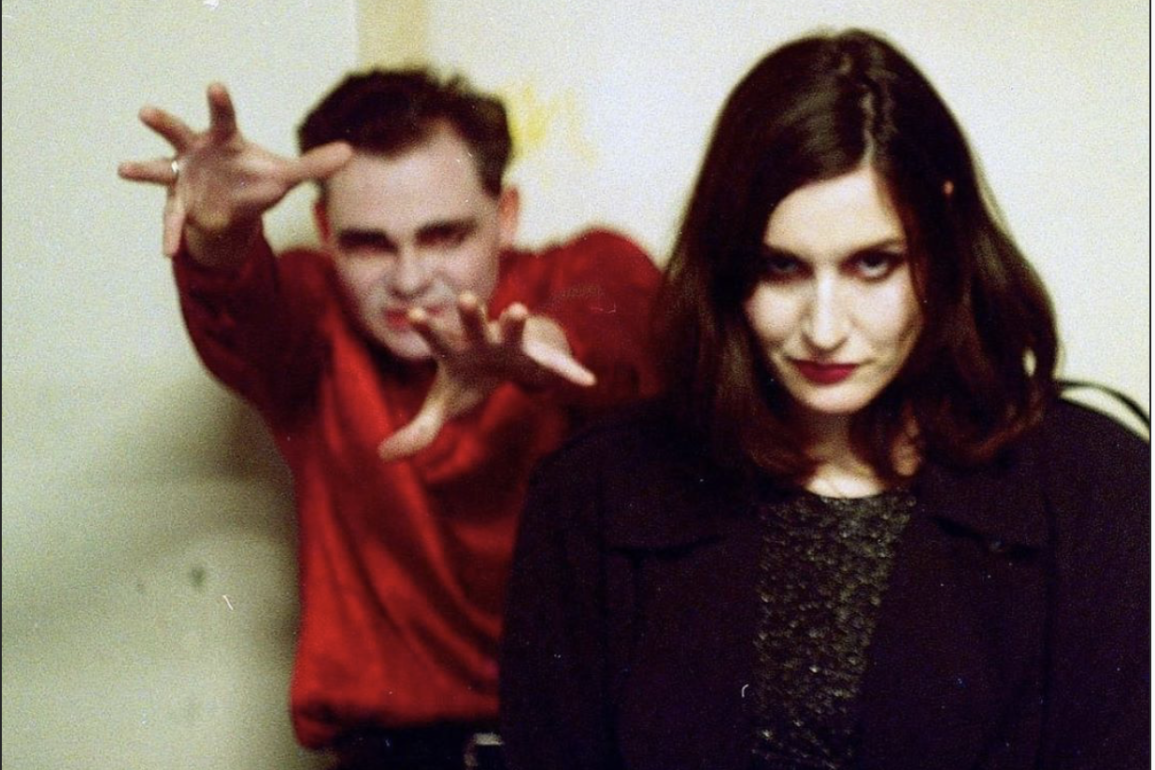 Lebanon Hanover is a special band that has proven to be a major influence in today’s darkwave music scene. In their 10-year history, they have released 6 studio albums, all cherished to some degree.

We gave a listen to their latest record, Sci-Fi Sky, and loved it. We then contacted the two people behind the music: Larissa Iceglass and William Maybelline. Thus, the very sincere interview you’ll read below came to be.

Together we talked about topics such as memories, the darkwave scene, the meaning of being goth, the internet age and more. Hope you’ll enjoy reading.

You can click here for the Turkish version of the interview.

How are you doing in the current pandemic?

Larissa: I am giving my best each morning to stay mentally healthy. Some days it works, some days are just crap.

William: Fine thanks, just staying active is the best thing and trying to remain optimistic.

Congratulations for your latest album, Sci-Fi Sky. Here you once again cover dark themes, but in the light of the current events I believe it opens doors to a brand new perspective. Can you elaborate on the creation process and how do you believe it has grown since?

Larissa: We have taken our appreciation for the early 80s’ new wave and post punk to the next level. This time we ogled at heavy metal, industrial, 90’s shoegaze and neo-folk to give the classical LH sound a new polish.

William: I was pulling ideas from different places, i was listening to a lot of drone, doom metal and early industrial music. Combined with the LH approach, it was all merging, thus the album formed.

How do you decide which one of you gets to sing the vocals in your songs?

Larissa: We let the gut feeling decide and we usually agree instantly on who will sing for which track.

William: It usually comes naturally, we just get a feeling of who’s voice could work and it seems to work out well.

You name-drop The Cure in the lyrics of the opening track “Living on the Edge”. What artistic influences shaped Sci-Fi Sky? Whether they’re music-related or not…

Larissa: My thoughts, essays that I read and my own humble feelings is what I process in my lyrics. Musically it was a broad approach with an intense phase of Kino and Uncanny Valley, but we even got into Pink Floyd.

William: I was influenced heavily by the industrial band Coil, and bands that are similar… To be honest I don’t remember all so clear, it’s not just music that influences me, I feel it’s also connected to how I feel before I compose music.

The album has a dystopian vibe to it starting with the name and arguably extending to some songs like “Digital Ocean”. Are you fans of dystopian literature?

Larissa: It is not really my favorite genre but I often get reminded of (George Orwell’s) 1984 and find it brutally scary how some of it is reality meanwhile. In China they call it “sky eyes”, which are literally cameras that watch you and track your face everywhere. I have a lot of dystopian scenarios on my head though and often I lose my faith in humanity.

William: I cannot say I am, although I could say I’m mostly into dystopian movies like Dune, Blade Runner, Alien, then of course similar movies along those lines.

There are also constant signs of romantic nihilism which, to me, is essential to Lebanon Hanover’s lyricism, the lyrics of “Angel Face” being a solid example.

William: I am completely confused by your idea of the song being nihilistic, as I wrote this song with ultimate real profound love for my baby boy.

Where does “Come Kali Come” lead us to conceptually? It sounds dark even by your standards.

William: I wanted to lead the listener into a spiralling black chasm of death.

Switching to the technical aspects, what models of instruments you enjoy playing the most?

Larissa: I love my Fender Telecaster USA. Synthesizers that fascinate me are analogue early 80s, like Arp, Moog and Ms20.

William: I enjoy using the Ensoniq SQ80 for great wavetable synth sounds, I also like using modular system which has many arrays of fantastic modules. And always happy to prepare the bones of tracks with the MPC Live.

You are two people who come from two different geographical backgrounds, and there is another duality in the latest cover art, where we see two monoliths standing side by side. Can you elaborate on that?

Larissa: Looking at those two pillars and the big moon, everyone gets reminded of something surreal somewhere inbetween reality and fiction. The artwork is there to leave room for your own imagination.

William: The obelisks are reminiscent to what we find in Egypt, they are great carers of death. And the common theme shows that as they built the pyramids pointing to the sky, the sky is the spirit, the energy in the air… Sci-Fi Sky is very fitting with such an image and it brings a wholeness to the sonic atmospheric power of the album.

Looking back, you have come a long way in the underground music scene. You have a devoted fanbase, you occasionally play at bigger festivals like Montreaux… But what is your biggest accomplishment so far in your eyes? Any specific moment or event?

Larissa : It is the little moments that bring tears to my eyes. For instance if I see a touching drawing or a tattoo made of us, or for instance when we checked in at a hotel in Moskow and the guy at the reception recognized us and prepared a red curtain for a photo the next day. It is those little moments that make me so happy and proud of the long way that leads us to where we are now.

You were Last.fm neighbors before you met in person. Nowadays, all the support the bands get are there thanks to the internet. How supportive has your fanbase been in the pandemic?

Larissa : Making our living entirely from our e-store and downloads since the beginning of this year, the support of our fans actually saved us. We celebrate each download and are incredibly happy about the support from our fans during this pandemic.

William: I feel like our fans have stood by us every step of the way, whether its an apocalypse or just a heavy blizzard of snow… Or a virus. We love them all very dearly and are forever grateful to them.

Your style has a mix of influences in it, but it can easily be described as goth. What does the word “goth” actually mean to you? I’ve recently scrolled through some interviews of the great Peter Murphy, and he seems to have problems with being labeled as “goth” himself. What makes a goth artist goth?

Larissa: I’m not into genres or labels. For me they are just there to give people security to know where to allocate something. Personally I feel more like a free spirit, an alien that doesn’t fit anywhere.

William: Goth to me is a way of life, it is in the very marrow of your bones. You’re touched by it and you’re forever scarred in black. We are both naturally goth, but never really highlight on the fact. It’s just part of us.

What bands or works from the underground scene first caught your ear and shook your world?

Larissa: Deutsch Amerikanische Freundschaft was one of my eye openers, from there I discovered a whole new era and my fascination for everything that came out in the early 80s. Bands like Malaria! gave me the courage to succeed as a woman in the music industry.

William: Uncanny Valley are an amazing band. And on the techno/EBM side of things, I am a big fan of Sarin.

Darkwave is a genre that is becoming more and more popular with new, creative bands emerging all around the world. How cool is that? What do you think is the reason for this rise in interest?

Larissa: Perhaps these bands are also fed up with the overproduction that has been going since the 90s. Modern digital sounding music just totally lacks any feelings.
Forming LH was initially a thought as a revival for raw music from the early 80s. “Nostalgia is negation” was the concept for denying anything that is overproduced and digital sounding.

William: I feel like it finally grew more known due to us, and great bands like Selofan, She Past Away, and Boy Harsher. But to also add, I believe that the bands were also a catalyst to make more Darkwave nights so it all built from one another.

I guess Fabrika Records operate similar to a family at this point. In what ways has Fabrika contributed to the scene?

Larissa: Ever since we met Joanna and Dimitris in 2011, we have been surfing on a mutual wave. Feeling the same lack of feelings in today’s music. Having a very similar background of 80s bands we adore.

William: They are wonderful beings as well as being a fantastic label. They put out some of the best music in the scene to date. So it’s quite simple to see.

What have you been listening to lately?

What about other fields of art? I know you’re fascinated by the art nouveau aesthetics. Any major influences you rarely talk about?

Larissa: When it comes to fine arts I have a special devotion to feminist performance art of the 1970s, Valie Export, Esther Ferrer, etc. I was studying fine arts before living solely by this vocation.

William: I am influenced by living in Athens, Greece, the greatest city in the world.

You have performed here in Istanbul two times. Any concert memories that you can’t forget?

Larissa: I remember the women in the Istanbul crowd were really sweet. They were constantly shouting compliments at me whilst performing, making me smile, and it was hard to keep my gloomy poker performance face.

William: Around 2 years ago, Berlin, So36… Mind blowing and euphoric. I even ended up with the outside shell of the microphone imprinted in blood of my forehead.

Could we get another Fabrika Night here once all the dust has settled down? Another night with you, She Past Away, Selofan and more would be really cool.

Larissa: The dream is mutual. I always think back of the Fabrika nights with special longing. We were unstoppable, the 6 of us.

William: I don’t see why not 🙂

Where do you think these times of uncertainty will lead us to? What plans do you have regarding the future?

Larissa: Uncertainty sometimes helps us focusing on what really matters. It shows us how unlasting everything is, and therefore I will try and focus on what makes me happy in life: Travelling to see my friends, spend more time by the sea, play shows and spend time with my husband and my three daughters.

William: We must not make a fuss of the uncertain times but instead turn to optimism. As hope dies last, we shall hold on together and smile together no matter what. And I shall continue to make life-changing music with Lebanon Hanover and my solo project, Qual. 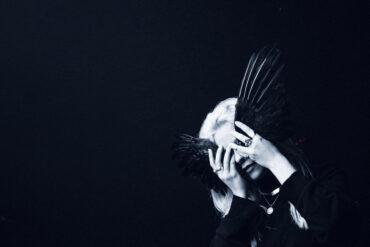