Liars: “When The Sci-Fi Verges Onto Terror!”

Angus Andrew’s long-running project Liars is back with their tenth studio album The Apple Drop… for some time now. We contacted Andrew for an interview (better late than never) to discuss a variety of topics and discover some really fun and interesting new information.

Thanks for doing this interview with me Angus, especially since The Apple Drop is out for nearly two months now.

I think you’re right man. The time is really weird now to be doing this.

Better late than never, am I right?

Have you been observing its reception, or have you just moved on to new projects?

I don’t pay attention to the reactions. I just learned over the past records that it’s better to move on to the next thing. Normally, this stage would be on tour, but touring has gotten all weird and difficult. So I’m just working on other projects. There are a few more elements of The Apple Drop still waiting to come out. It was nice to get it out there, though.

That’s right. We’re actually working on that. Then we have the 20th-anniversary release of the first record (They Threw Us All in a Trench and Stuck a Monument on Top) coming out, so we’ve been collecting demos and b-sides from that as well.

That’s really cool. Returning to The Apple Drop, I guess we can define it as a concept record with its recurring themes and focused sound and craftsmanship. Can you elaborate on its background and what it’s all about for our readers as well?

First of all, the idea of a concept record is kind of difficult in some ways, because the idea of “concept” is what I’m used to when making a record. That’s how I make sure the thing is gonna speak and work the way I imagine it to be. It helps me to do that. I don’t know how important it is for the listener to fully understand the concept I’m working from, you know?

With that being said, the idea of the record was a journey that is not only physical, but psychological as well. It’s the experience of going through an event of moving away from a beginning and then coming back to the start again. It has got a lot to do with my personal psychology, but then I also tried to apply it to this science fiction, space exploration idea.

For The Apple Drop, you collaborated with talented artists including Laurence Pike and Cameron Deyell. Earlier this year, I interviewed Jamie Stewart of Xiu Xiu, whom you made a duet with on their OH NO album. And it was a whole album of duets for them. I observe more and more collaborations in the pandemic age where we all have felt introverted every now and then. Do you see connecting to people and collective creativity as a method to escape and refreshment?

Yeah, I think that’s a fair point. Certainly for me, it hasn’t just been the pandemic that brought it on, but I think that’s part of it. I also probably needed to get to a point in my life where I was open to that kind of collaboration, and that took a while. It takes a certain amount of confidence in your own work to be able to allow other people to get involved in it.

I agree, I think there is more collaboration going on, particularly in certain circles of music that I’m aware of. That’s just gotta be a good thing.

It must be healing a lot of artists as well, I imagine.

Yeah… It’s been a weird period for artists, musicians in particular with the removal of playing live shows for so long. There has been doubled effects on it. Everyone decided to make a record during the pandemic, which is understandable because there was so much time. But now as we’re sort of moving out of it, it still seems difficult for people to tour. I heard from a few artists that they were making their second record now without actually having toured the first one. I believe this will have some sort of profound effect on the output of musicians, but we won’t really be able to understand that for many years to come.

I love the writer Neal Stephenson. There’s a book he put out recently called Seveneves, which is great. I’ve always been a sci-fi guy, but some of the best sci-fi is pretty trashy too, you know? Remember the movie, The Fifth Element? I was pretty young when that came out, and super excited to see it. It really disappointed some when it came out (laughs). But I still love it. And William Gibson: When I was a teenager, I found the idea of William Gibson coming up with a concept resembling the internet while still writing about it with a typewriter to be really exciting. Even the bad, trashy things like Battlestar Galactica I can get sucked into watching. There’s such a huge tradition of it. When I try to boil it down to its appeals, there’s always this idea of escape. How to get away from this planet… (laughs) I also love the idea of whether or not you should pull your resources to fix this place or to just get off of it. That’s a really interesting conundrum, and I like to play with it.

With you speaking on the psychological nature of the album a while ago, I wonder if there’s a conscious horror element in the album as well. Early singles like Sekwar, Big Appetite and also their music videos feel claustrophobic, Lovecraftian and John Carpenteresque simultaneously.

Yeah. I love it when the sci-fi verges onto terror! (laughs) It’s one of the best things about space, too. I love the idea that you can’t hear anything. Someone’s screaming, but it’s just silent… Yeah, those influences were big. John Carpenter is a good one.

I worked with a filmmaker who also did the album artwork: Clemens Habicht. He really had a great influence on the direction of visual aesthetics. For the first time while making a record, I was working with him while still writing the lyrics and creating the songs. His visual input, in effect, made me reconsider the lyrics in the way I was approaching songs. It became this conversation between his vision and where the music was going, which was great. I had never done that before.

If you were given the chance to soundtrack a certain director, or just work with any director for that matter, who do you think that would be?

Jeez! (laughs) That’s a hard one. I did a soundtrack a few years ago, and I found it both really great and really tough. Doing a soundtrack, you really have to understand that it’s not your project. Your work is just there to help the vision of the director. It’s a tricky spot to be in. It just freaks me out. It’s difficult. I could imagine Christopher Nolan would be great to work with. Just because his worlds are so complete. But I don’t know if my music fits that kind of thing. It would be great to work with Kubrick. I think Alex Garland is pretty good… I don’t know. There are a million of them that would be interesting to work with.

I’m not sure Nolan could ever appreciate Liars’ music, but I hope he does! (both laugh)

As a project who has 10 studio albums already on their catalog, do you have any favorite children or works that you feel are underappreciated?

The only one I would say is probably the first one, They Threw Us All in a Trench and Stuck a Monument on Top. Just because in time it has become relegated to this post-punk/dance-punk kind of thing. It now seems like a boxed-in, pigeonholed idea for that record. Even I occasionally thought of it in a weird way because it’s the first one and stuff. Going back to it now because of the anniversary has been really interesting and eye-opening to me, in terms of what was going on in that material. I was so naive back then, I really didn’t think people would actually listen to it. It was a real shock to me when I started hearing people say, “Oh, it’s obviously influenced by this and that…” I was like “Woow… Okay. I’m not gonna do that again.” (laughs)

You have explored different sounds in your catalog. My favorite Liars record, Mess, is significantly techno and electronic while The Apple Drop feels more introverted and sort of Radiohead-influenced post-punk at some points. Is there a genre that you haven’t touched upon yet, but would love to someday?

First of all, I think the way The Apple Drop sounds in comparison to records like Mess is that it’s much more traditional and organic in a way. Because the instruments are mostly played in the studio… That was a big step for me. And I appreciate what you said about Mess, because it was a weird one for people to understand.

I can say I’m always interested in that stripped-down acoustic spaces. So more traditional and more acoustic is possibly what I’d like to try someday. Obviously, I would still like to feel that I’m experimenting in a way with the genre. For me, that’s a place of nakedness that I haven’t allowed yet. It would be interesting if one day I had the courage to just sing with one instrument. I don’t know how interesting it would be for anyone else, but for me it would. (laughs)

Would you like to elaborate further on what upcoming projects and ideas you have on your mind for Liars?

I’m sure you’ve heard these stupid little things called the NFTs. I was intrigued by this and so is the label. We’ve been working on doing some Liars NFTs, which is really weird and interesting. You get the scoop on that because it hasn’t come out publicly yet. (laughs) I really have fairly low expectations for what that can do, but I also want to explore the possibilities of releasing music in that medium. It’s interesting because it’s something that people get to own themselves. That music won’t actually go on to any platform or anything. It’s weird and I’m excited about it.

It’s crazy how fast the face of the music industry changes, huh?

It is, man. It always seems to get crazier. With each record that I put out and with all the variations of platforms, I always think back about the first record. It was so much simpler! (laughs) This is what is exciting, though, not knowing where things are headed…  As a creative person, I always find that a fascinating spot to stand.

Let’s imagine we’re 100 years into the future. There’s a Liars memorial stone inside a “Music Legends Theme Park”. If you could personally choose one of your lyrics to be written on your memorial, which one do you think it would be?

That’s a funny question! (laughs) Oh gosh! I guess it would be “I can always be found” from the song The Other Side of Mt. Heart Attack. For some reason, that just seems like the right thing to put on a gravestone. And funnily enough, a lot of the imagery from that record has a lot to do with gravestones and things like that. That’s the one I’d put on there, I think. For now! But you never know… Next week I could write something more appropriate.

It literally is a gravestone! (laughs) “This is where you’ll find us.”

You can check out Liars’ Bandcamp profile here. 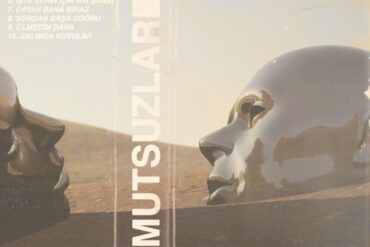